“Young and Breastless EP” was released in 2008. It was the first release in physical format.
Eva had just quit the band, and Lindas son Edwin was just a couple of months old. The label Tonehjulet Kräftpest (http://kraftpest.bandcamp.com/)
had just been established, but this record was not realesed on TK.  It was recorded in Oslo with the great producer, and super cool guy, Lars Klokker’n Klokkehaug (rip). The coverphoto was shot by Håkon Borg, in the formal dining room at Karines parents farm. The cover design we did ourselves.

Fun facts:
– A lot of people think we sing “I just wanna fuck” in the song Blast. It’s actually “I just wanna have fun”.
– The title “Young and breastless” came up because of Lindas bad English pronunciation in the song Blast. She tried to sing “Young and restless”, and when we heard the mistake, we thought that it was a good pun and named the record after it.
– The flange on the song Nothing to Worry about was an attempt to get the Nirvana sound. Sure…
– The song Monkey is about the lead singer in the super cool, Swedish band, Leaders Off.

Check out the record on the bottom of this page! 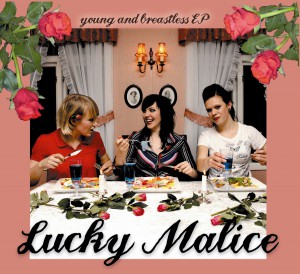 This entry was posted in Blog, Lucky Malice 10 years. Bookmark the permalink.